Children react to environmental influences, such as parenting style, differently. Recent genetic studies have found that some children are affected more than others by environmental factors right from the start. They are born more susceptible to both positive and negative environment. This phenomenon is summarized in the Differential Susceptibility Hypothesis.

What is Differential Susceptibility

Differential susceptibility to environmental influence summarizes the observations that some individuals are disproportionately more susceptible to both negative and positive environmental conditions. It explains why people react differently to apparently same environment​1​.

Children vary in whether or not, or the degree to which, they are affected by the environment. That is, children vary in their susceptibility to rearing influence​2​.

Individuals with heightened susceptibility are more plastic or malleable. They are more sensitive to both beneficial and adverse rearing environments in early childhood​3​. This enhanced sensitivity to environmental influences can result in enduring developmental changes​4​.

Susceptibility to environmental influences is rooted in the biology of the nervous system. But besides neurobiology, experiences during the early years and early child care also play a role in determining individual differences in susceptibility​5​.

The Differential Susceptibility Hypothesis differs from the Diathesis Stress Model in how susceptible individuals are not just more vulnerable to negative conditions but they are more plastic to both positive and negative environment.

Decades of research demonstrates that exposure to environmental adversity, such as child maltreatment, unsupportive parenting, or negative life events, places children at elevated risk for developing antisocial behavior and psychopathology​6​. However, not all children would develop psychological or physical disorders under those conditions.

For over 30 years, the causes of this phenomenon are dominated by the Diathesis Stress Model (also known as the Dual Risk Model), which states that children with ‘difficult’ temperaments, or who carry certain risk allele, e.g. the s allele, are more likely to result in maladaptive outcomes when facing different stressors. Some individuals are predisposed or more vulnerable to certain health problems or psychological disorders than others.

The model, first proposed in the 1970s, serves to explain why some people are vulnerable to the negative effects of adversity while others remain unaffected and are more resilient​7​.

But psychologists have found that this model is largely incomplete. It doesn’t lend itself to a convincing explanation to why this is a desirable human trait.

In the differential susceptibility model, some individuals are more susceptible to both positive and negative conditions, in a for-better-and-for-worse manner. Hence, the susceptible characteristics are not liabilities, but plasticity traits​8​. Given supportive rearing and social environment, these people can reap the most benefit.

The Origin of Developmental Theories

From an evolutionary perspective, both supportive and adverse childhood environment have been part of human experience throughout our history. Differential susceptibility allow the human species to adapt to both kinds of contexts​9​.

Two different hypotheses, DST and BSCT, have emerged to interpret the existence of individual susceptibility to the environment.

DST, proposed by Jay Belsky at the University of California, Davis, suggests that developmental plasticity is based on evolutionary biology and natural selection.

Evolutionarily, it is advantageous that children, especially within a family, vary in their susceptibility to both adverse and beneficial effects of rearing influence, because parents could not know for certain what rearing environment would maximize children’s survival. Differential susceptibility is proposed as a bet-hedging strategy in human evolution.

If an effect of the environment is proven counterproductive, the less susceptible children will be less affected. On the other hand, if a parenting style is proven beneficial, the more malleable offspring will benefit more.

This genetic variation allows the genes proven adaptable to the environment to pass on. As a result, humans, unlike other animals, can adapt to drastically different climates all across the world​10,11​.

In stressful environments, children’s chances of survival and eventual reproduction is increased if they develop heightened sensitivity and vigilance to threat. The adaptation to childhood adversity “makes the best of a bad situation”​14​.

On the other hand, in supportive and enriched environments, increased reactivity allows children to adapt reproductively relevant processes and behaviors optimally such as growth, status, fertility, and offspring quality.

Under the BSCT regime, differential susceptibility is the result of the human stress-response system adapting to individual’s respective environment in early life.

Susceptibility factor is therefore more of a developmentally regulating strategy than a vulnerability or risk factor, even if those strategies may be harmful in terms of the long-term welfare of the individual or society as a whole in normal conditions.

Differential susceptibility hypothesis has shed immense light on why children react differently to the same environment or parenting style.

There are three types of plasticity markers or factors:

Here are some examples of these markers and the effects of their Parenting x Environment interaction.

Difficult temperament is defined as low inhibitory control, high dispositional frustration, high activity level and/or low soothability. It is a phenotypic factor (factor you can “see”) that demonstrates the differential nature of the child behavior.

In one study, researchers tracked the levels of externalizing behavior problems in a group of 16 to 19-month-old boys with difficult temperament. After 6 months, the boys who had mothers with high maternal sensitivity and infrequent use of negative control had the least increase in problem behavior. Those with highly insensitive mothers who relied heavily on negative control had the largest increase in behavioral issues. This effect was only found in the boys with difficult temperament​16​.

RSA is related to an individual’s capacity to regulate stress while cortisol is linked to impulsivity, poor self control, peer rejection and aggression. These two markers are a gauge of stress reactivity, which in turn measures biological sensitivity to the environment.

5-HTTLPR is a genotype factor in the gene environment interaction effects (denoted as GxE). It is a polymorphism in the serotonin transporter gene area.

Neuroscientists have found that positive emotion was protective against psychiatric disorder. Children who have high levels of positive emotion are more resilient and have better self regulation. Those who have low levels are linked to depression and other psychological disorders.

Neurodevelopment study has shown that young people who carry two functional copies of the S’S’ 5-HTTLPR allele are more genetically susceptible to the quality of parenting. They have significantly more positive emotion when reared in supportive parenting environments and significantly lower levels of positive emotions in unsupportive environments.

On the other hand, those with at least one copy of the L 5-HTTLPR allele showed relatively consistent levels of positive emotion across both the supportive and unsupportive parenting environments. These findings are consistent with the differential susceptibility hypothesis​20​.

Whether, how, and to what extent parenting affects a child’s development has been a longstanding interest to developmental psychologists, child psychology researchers, parents and educators.

Although there is an enormous amount of studies consistently proving parenting’s effects on child development, these correlational research is open to question regarding cause and effect. The question of why a shared environment in the form of parenting often cannot explain the variance in developmental outcomes among siblings remains.

In addition, researchers consistently find that parenting of identical twins is more similar than parenting of fraternal twins and that two biological siblings typically experience more similar parenting than do two adopted children.

The discovery of neurobiologically susceptibility has provided a much needed additional perspective on this “does parenting matter” question.

Due to genetic sensitivity, the influence of life stress on a child’s development are “neither as unambiguous as earlier researchers suggested nor as insubstantial as behavior-genetics researchers claim.”​21​

As parents, while we cannot change our biological makeup, we can make the rearing environments safe and supportive for even the most sensitive children to thrive. 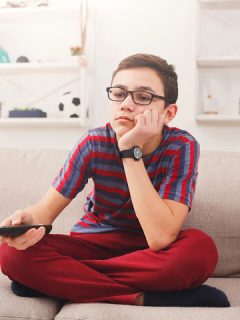