How To Discipline a 1 Year Old & When To Start

Turning one is a major milestone and it usually means toddlerhood. You may start to wonder how to discipline a 1 year old.

Disciplining a toddler during the first year should not be taken lightly. How we decide to discipline can have serious long term ramifications to a child’s development.

What age should you start discipling a child?

You can begin teaching your child by talking to them right after birth. Good behavior won’t happen right away. The more you talk about the whys, the quicker your child will develop critical thinking skills.

Also, the earlier you begin to reason and explain, the sooner you will get into the habit of teaching your child with reasoning rather than punishment.

When do babies know right from wrong?

Although the basic circuitry started developing before birth, it is not mature until a person reaches their 40s​1​. So, start explaining and teaching as soon as possible, but be patient as it will take time for learning to sink in.

How to Discipline a One Year Old

Here are some practical tips on teaching 1 year old how to behave.

Before 1-year-olds learn how to follow rules, put in measures to prevent mistakes and ensure they stay safe.

Make your home toddler-proof. Put up a barrier to keep dangerous objects out of reach, set limits on what they can access, and have someone watch over them at all times.

Some 1 year olds start having terrible-twos early. So plan your day to prevent tantrums by avoiding the following HALT situations:

If your child gets into trouble, instead of showing your disapproval, first make sure they are not hurt. When you show that you care about your child above a clean wall, it will greatly increase their confidence in your love for them.

One-year-olds are babies. They don’t misbehave intentionally. But they do have a knack for getting into trouble, whether it’s reaching for a forbidden item or wandering off.

Set clear limits and be consistent. If you don’t want your baby to play with your tablet, don’t let them play with it “just this once”. When they were able to touch it yesterday, but not today, it can be frustrating. No matter how many times you said, “Just this one time,” to your child, you still said, “Alright, I’m negotiable.”

Take a few slow, mindful breaths when you have a hard time remaining calm or you feel you’re about to lose control. Having a clear mind will allow you to respond calmly instead of emotionally.

Model self control and emotional regulation for your little one. Show them how to stay calm even when things go wrong.

Research shows that parents’ thoughts about unwanted behavior can influence their actions. If parents think about the misbehavior with negative emotions, they are more likely to over-react to the undesirable behavior by being angry, irritated, and using physical punishment​2​. Such discipline strategies more likely lead to conduct problems, emotion regulation difficulties, and low social skills in children.

Our brains cannot think clearly when we overreact. Staying grounded allows us to think more clearly about how to handle the situation without adding to the chaos.

Your child is watching you all the time.

Model the behavior you want to see in your child.

That means, if you don’t want your child to scream when things don’t go their way, you don’t yell when your child doesn’t behave.

When they make a mistake, help them practice by doing it again the right way if it’s safe to do so. For example, if they throw the spoon on the table after eating, explain why that is not a good thing. Then, demonstrate how to gently put it down and get your child to practice on the spot while it’s still fresh in their mind.

5. Use inductive discipline, not punishment, to teach.

In power assertion, a parent uses his or her authority and power to force a child to change behavior. These parents often discipline with coercion, verbal hostility, and psychological control​.

Despite the fact that power assertive discipline may produce conformity in the short term, in the long run it tends to increase defiance. Adolescents brought up with this type of discipline are notably incompetent and maladjusted​4​.

A love withdrawal is an expression of disapproval or anger that is not physical but direct.

Induction is using reasoning to explain to the child how their actions have consequences. Studies have found that explaining the effects the child’s bad behavior has on other children or people has multiple benefits over power assertion and love withdrawal.

Inductive discipline helps children to develop moral judgment and empathy on a higher level. These young children show a greater sense of kindness​​5​​.

When children learn how their actions can affect others without external punishment, they internalize the reason for changing their behavior and become more compassionate. They tend to make decisions based on internalized values such as justice, equity, and empathy. The moral reasoning they develop is stronger​6​. In addition, these children have fewer behavioral problems, such as physical aggression and impulsivity​7​.

6. Praise good behavior and focus on effort rather than results.

For example, instead of saying “you’re a smart kid”, you might say “you were so tenacious and you tried so hard to make it work.”

7. Be patient and positive.

Many parents are hesitant to adopt inductive discipline because they believe it “doesn’t work” after trying it a few times.

When toddlers are learning to stand up, they often try and fail repeatedly. A toddler learning to stand upright steadily takes a great deal of practice. We wouldn’t say, “Stop it. “We won’t try again until you decide to stand.” Instead, we patiently help them practice because we know it takes time for them to learn how to control and develop their leg muscles.

When it comes to discipline, many parents believe that if their children don’t learn it after a few tries, they must be defiant and deliberately misbehaving.

The human brain learns in a complex manner. Repetition is necessary for the new information to be absorbed and utilized​9​. When disciplining your strong willed one-year-old, being patient will pay off.

How do I deal with 1 year old tantrums?

The most important part is to remain calm when contemplating how to discipline a 1 year old who throws tantrums.

You will likely feel frustrated when your 1 year old is screaming, kicking, hitting, and throwing food. Children learn to self-regulate by watching adults​10​. Do not expect a baby to remain calm if you cannot. Learn more about tantrums in older toddlers: How to Deal With 2 Year Old Tantrums For Best Child Development 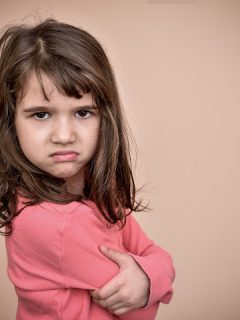