Relational aggression is a covert form of indirect aggression that often goes unnoticed. Essentially, it is emotional bullying.

The issue of bullying and overt aggression in schools has received much attention in recent years​1​. Although we have made great strides in our understanding of childhood aggression, gender differences in aggression have received little attention.

In general, physical and verbal aggression is significantly higher in boys than in girls.

Children become more aware of the social world as they grow. The need for social relationships increases as this awareness grows, especially for girls. Girls, as opposed to boys, are more likely to focus on relational issues and connection building in social situations. Girls are more likely to engage in relational aggression to harm peers because of their social concerns.

What is relational aggression?

Relational aggression is behavior that involves deliberately hurting (or threatening to hurt) a person’s relationships or feelings of acceptance, friendship or group inclusion. Physical aggression, such as hitting or kicking, causes bodily harm, whereas relational aggression involves interpersonal manipulation. The goal is to undermine another child’s relationships with friends or to harm the reputation of a peer. Sometimes, in popular literature, the perpetrator is called a “mean girl behavior,” even though not all of them are considered vicious.

A few examples include sarcastic verbal comments, speaking in a cold tone of voice, ignoring, staring, leaving out, spreading rumors, “mean” facial expressions, and even cyberbullying. They all manipulate or cause damage to relationships for the purpose of hurting the victim’s self-esteem or social status.

Relational aggression is a type of bullying since it consists of repeated acts directed at someone with the goal of harming them, but it may not be immediately apparent when it happens.

Here are some common examples of relational aggression behavior in children.

Who engages in relational aggression

Contrary to previous studies that showed girls to be more likely than boys to exhibit this type of behavior, newer studies report that both boys and girls exhibit similar levels of social aggression​2,3​. Therefore, it is unclear whether one gender is more likely to engage in it than the other and more research is needed to determine this​4​.

Furthermore, in girls, this form of aggression increases with age, but in boys it decreases​7,8​.

Relational aggression has been observed in young children as early as 3 years old​9​, whereas more sophisticated and covert forms appear in middle childhood, late childhood, and adolescence​10​. It is also found in romantic relationships in adults​11​.

Relational victimization manifests itself differently with age, reflecting the social, cognitive, and emotional changes associated with maturing. Aggression in preschool usually involves face-to-face interactions, such as holding one’s hands over one’s ears as a sign of ignoring another or threatening to exclude someone from a party​12​.

In middle childhood, children tend to use more sophisticated peer maltreatment including both indirect (such as spreading rumors) and direct (such as excluding someone from a group) aggressive behavior.

Through adolescence, these forms of aggression become more subtle and complex. As opposite-sex friendships and romantic relationships become more prominent during this developmental phase, new contexts for expression of relational victimization emerge. For example, stealing a friend’s boyfriend or telling the boyfriend lies to harm their romantic relationship to get revenge.

Research has found that there is a strong association between parenting style and children’s aggression​13​.

Researchers notice that individual differences in temperament seem to be associated to aggression in children. They have found that children with difficult temperament tend to have aggressive tendencies and display less prosocial interactions​15​.

A number of studies have also found that school factors, including norms about behavior and climate, are highly correlated with students’ academic and behavioral outcomes.

The low involvement of teachers in relational conflicts could send the signal that relationally aggressive behaviors in adolescents are normal and are temporary​16​. As a result middle schoolers can engage in such behavior without repercussion.

Difficulties in psychosocial adjustment caused by relational aggression are as widespread and long-lasting as those caused by physical aggression​17​.

Student groups with high levels of aggression are also made up of rejected and controversial students​19​. Such students suffer from social maladjustment, such as depression, loneliness and social isolation. Their existing peer relationship is generally unsatisfactory for them.

Relational aggressive behaviors can affect the victim’s social, academic, and psychological well-being​20​. The victims of such bullying behavior tend to suffer from anxiety, lack of self-esteem and depression​21​, which, in turn, is associated with suicidal ideation.

Additionally, children who are frequently the targets of social aggression are more likely to be rejected by their peers. Many chronic victims tend to view themselves as the cause of maltreatment by others, thereby perpetuating their low self-esteem, difficulty adjusting to life and increases in victimization.

It seems that girls are more likely to suffer from social and emotional maladjustment as consequences of victimization.

When a girl feels close to her friend, she is more hurt by the aggression. At the same time, however, some girls become closer to the perpetrator after the incident.

Study results show that seeking social support is the most effective way for girls to resolve conflicts within a friendship while maintaining the friendship​22​.

For teens whose conflicts are malicious and cannot be resolved by themselves, seeking help from teachers or counselors is the best option.

Presently, there are no empirically proven treatment programs that specifically target relational aggression in children. As parents, we can watch for changes in behavior in our kids so that problems are caught early. More research is also needed in this area. 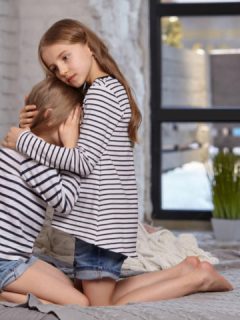 Previous
Parentification - Growing Up Too Fast

Next
What Is Montessori - Philosophy, Method & Effectiveness Parents Should Know
5 Things Parents Can Do To Help Their Children Thrive and Excel In School