How To Deal With Kids Talking Back

Kids talking back to you can be upsetting.

You immediately feel a ball of fire rushing toward the heart, and something clicks in your head, telling you that your kid cannot talk to you that way.

“You don’t talk to me that way. I’m your Father. You need to show me respect.”

Fast forward twenty years later, Steve recently graduated from college and started a new job. Everything went well, and he was happy about his new career, except that he didn’t know how to express his disagreement with his superior. He tried to present a new idea to his boss, who kept dismissing it. One day, he was very frustrated and had an outburst in the office yelling at his manager for dismissing his idea yet again.

In another workplace, Mary, also a new graduate, was assigned several projects. She did them all and did them well. Naturally, her manager assigned her even more projects. She was gaining responsibility. It seemed like a good thing, except that her salary stayed stagnant and below the level of her male counterparts, and she kept getting the most boring and difficult projects no one else wanted to do. Also, despite receiving words of appreciation from management, she kept being passed over for promotion. Yet she said nothing even though she was miserable.

What do these two people have in common?

But there’s more – they were never allowed to backtalk when they were young.

Steve never had the chance to learn to disagree respectfully, because any disagreement was considered back talk, and he was never allowed to voice his dissent. He also had a lot of pent-up anger because he felt he was never heard. So when he was frustrated at work and didn’t know how to handle the disagreement, he exploded.

Mary never had the chance to learn to be assertive, because any attempt to be assertive was viewed as talking back and she was never allowed to talk firmly and confidently to adults.

When a child talks back, it’s easy for parents to be fixated on how they say it rather than what they say. When we feel disrespected, we become reactive and try to stamp out the source of hurt feelings.

But if we only focus on our own feeling, we forgo the opportunity to teach our kids valuable skills.

How To Deal With Kids Talking Back

Believing children should not be allowed to talk back to parents is an authoritarian attitude that is linked to more conduct problems in children​1​.

There is a better way to handle rude behaviors. Allowing kids to practice disagreeing actually has many advantages. It will even put a stop to the negative behavior if you also do the following:

1. Teach Them How To Disagree Respectfully

First, take a deep breath to calm yourself.

Allowing kids to talk back is allowing them to have a voice.

Of course you shouldn’t encourage rude remarks or verbal abuse. However, parents also shouldn’t see everything as talking back. Not all rude comments are due to limit-testing, negative attention seeking or the lack of discipline.

Children, especially younger ones, do not have good emotional regulation skills. So when they object something important to them, their strong emotions will naturally overcome their reasoning.

Rather than being intentionally disrespectful, most kids just speak with emotions they don’t yet know how to control.

If we focus on the disrespectful tone, but ignore the message behind, we will not be able to help them or meet the kids’ need. And if we strictly disallow any negative tone, kids will not have the opportunity to practice delivering their messages in a controlled way.

Practicing means they will make mistakes. Don’t expect a child to get it right the first time. The first step is to offer guidance and a chance to practice.

We need to keep our cool, point out the rude gestures respectfully and ask them to repeat their message in a respectful manner.

If we can calmly point out the improper choice of words and show them an appropriate way to express their needs, they will be more likely to do it the right way next time.

If they cannot practice, they won’t learn. They may grow up and become another Steve who cannot object in a peaceful way and sabotage their own career. You don’t want that for your child.

2. Help Them Practice Being Assertive

Kids could sound blunt and rude in the heat of the moment , but that’s easy to fix with a lot of practice (and your patience). Speaking anxiety, on the other hand, is not as easy to cure.

It’s important for kids to learn to be assertive and not afraid to speak up. Assertiveness is especially crucial for girls, who are often told they should be “nice.” Many women, like Mary, cannot stand up for themselves and ask for what they deserve.

Like respectful tone, assertive and respectful communication is a simple technique that requires practice so that children kids can assert themselves competently in a constructive manner. Don’t let your child become another Mary.

When you let your child speak up and listen to their opinion, you are modeling how to respect others. Providing a good role model is the best way to teach kids respect.

Punishing, yelling or having a shouting match will not inspire good behavior in your child.

Allowing your child’s backtalk means allowing your child to reason with you. Reasoning trains a child’s critical thinking, problem-solving, creativity, and negotiation skills. It is an important skill that will help your child go far in life.

If you are angry or too upset to teach well, walk away from the situation briefly to cool down. You are also modeling the use of coping skills to your child.

Make sure you’re calm and composed before re-engaging.

Sometimes, kids do push limits and want to engage in power struggles. That usually happens when they are angry.

Anger results when people, kids or adults, feel that something is wrong or unfair. When a child is overcome by anger, stress hormone is released, the thinking brain goes “offline”, and words come out in unacceptable ways.

Having a functioning thinking brain is essential to prevent tantrums and regulate emotions​2​. Using inductive reasoning to discipline your child can help them think through an issue and activate their thinking brain.

Parents are not omnipotent. I make mistakes all the time. I rather my child know right from wrong in any situations than agreeing with me all the time like a sheep.

Authorities are not always right. They’re human and human makes mistakes. Besides, some authorities do abuse their power. When that happens (it’s more often than you think​3​), you want your child to have the confidence to refuse abuse.

If parents are hung up on being the “parental authority” instead of focusing on modeling positive behaviors, chances are they have unresolved issues that can benefit from professional help.

When you treat your child as a rational human being instead of a subordinate, you build a close relationship. Your kid will feel heard. Eventually, they will learn to trust you, listen to you and stop talking back.

When you don’t focus on giving consequences for talking back, but work on inspiring them to learn, you will have less poor behavior, a more peaceful home, and a happier family.

Final Thoughts on Kids Talking Back

Parenting is hard and it is often exhausting. When parents are tired and upset, it is easy to forget that our own behavior affects how children react, too. Using “because I said so” as an answer to every disagreement is a parenting shortcut that won’t do any good to your child.

Allowing your child to have a voice and disagree is teaching them to be a leader, not a blind follower.

Previous
How To Get Kids To Listen 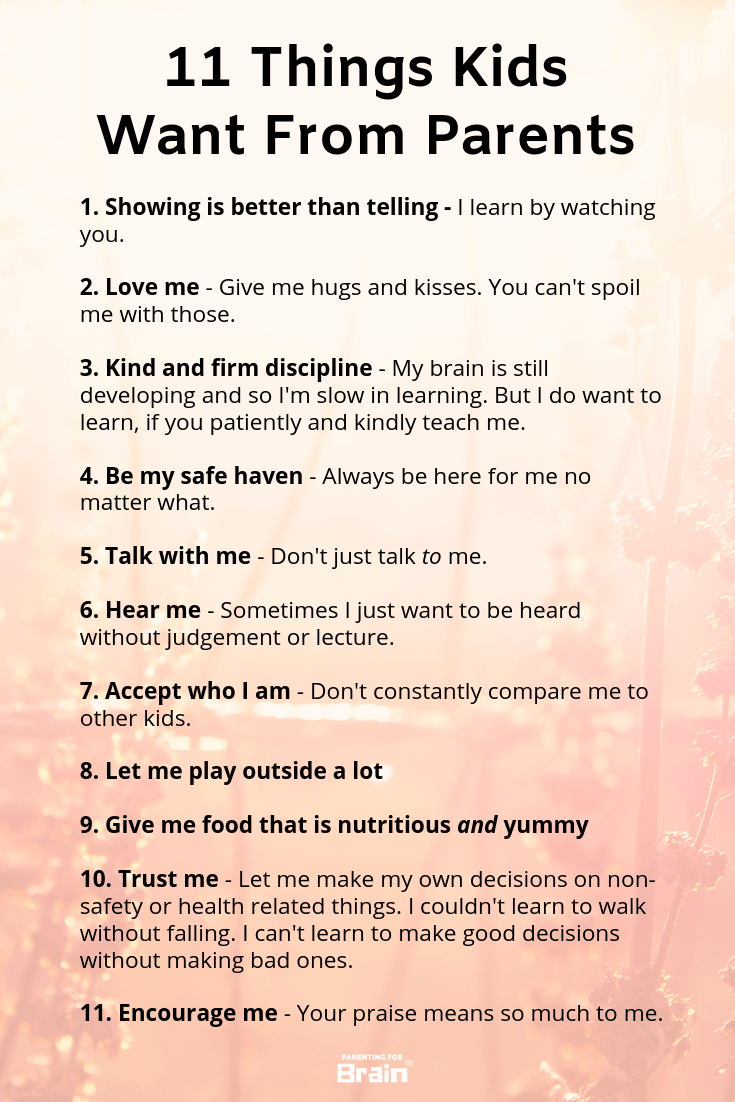 Next
Raising Children - 11 Things Kids Want From Their Parents